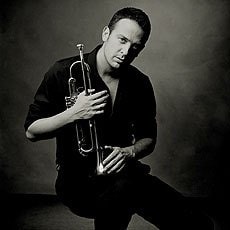 Born in 1971 in Viersen, Germany and raised in Rome, Italy, Till experienced his outset with the help of Louis Armstrong and Charlie Parker: “Hearing Bebop for the first time, Charlie Parker; that set the whole thing off for me. I was 13 years old and it was an almost erotic sensation. I thought that it was indecent. The music was like a woman having a go at me.” Till stems from a family of musicians; after a well-protected childhood, he enjoyed a classical education followed by a study of the jazz trumpet at Cologne’s Music Academy. After only three semesters he convinced the leader of Berlin’s “RIAS-Tanzorchester” at an audition, taking his first hurdle at the age of 20.

Only two years later, he raised more than one eyebrow with “Generations of Jazz”, being both a classic mainstream recording and his debut as a bandleader. By the time he released “German Songs”, his third album of old German film songs, arranged for jazz quartet and classical orchestra, he was the talk of the trade.

- in 2008 he is nominated for a Grammy Award in the category “Best Classical Crossover Album” for “The Jazz Album”, an album he produced with classical bass-baritone singer Thomas Quasthoff

- as a celebration of “50 years of bossa nova” he releases on September 19, 2008 his new album “Rio” recorded with stellar guests (such as Annie Lennox, Milton Nascimento, and Aimee Mann)